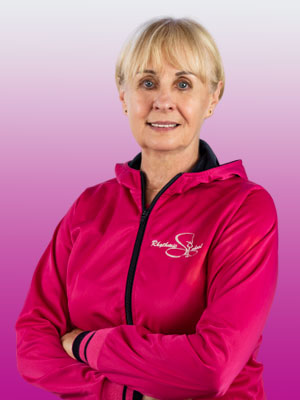 Tatsiana Shpilevaya’s professional career in Rhythmic Gymnastics is full of achievements and enormous satisfactions both as a gymnast and as a coach. As an Athlete she joined the Belarusian national team achieving the title of national champion as individual and for teams, she also won a Russian championship for teams.
Just after leaving the role of gymnast, TS graduated first in Economics and later got a Bachelor degree in Sports from the Physical Education Academy in Minsk, the Belarus capital

Her vocation remained Rhythmic Gymnastics; she never abandoned this activity, jumping from competing to coaching. She joined the Belarusian rhythmic gymnastics federation and covered many position, eventually achieving the title “Coach of Honour” of Belarus National Team and International judge.

TS coaching career has reached its top with Tatiana Ogrisko, European and World Champion of Rhythmic Gymnastics. Thanks to the results she achieved, in 1994 Mr. Bruno Grandi, the unforgotten President of Italian Gymnastic Federation, invited her in Italy where she joined the rhythmic gymnastics national team as head coach for the individualists. That choice was made to improve the gymnastic team ranking and try to reach the Olympic qualification.

In addition to 27 Gold and 17 Silver National titles we need to include many podium, silver and bronze medals, with both Individualist and teams, from local gymnasts trained by Tatsiana Shpilevaya. It is also important to remind the admission among the gymnasts of the Italian National Team “Farfalle” (butterflies) of Tento Sonia from 2004 to 2006.

Nowadays Tatsiana Shpilevaya is also an International Judge and National Coach. In 2019 she was appointed National Tutor by Emanuela Maccarani, the National Head Coach and Managing Director of the Italian National Team of Rhythmic Gymnastics; TS also is co-operating with different Sports Associations all over Italy with a focus on the technical skills and sport growth of the new gymnasts’ generation.